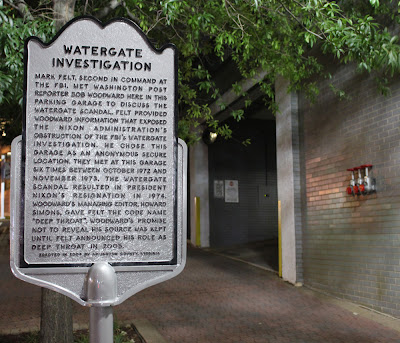 Less than two weeks after the Ode Street Tribune called for a historical marker for the Deep Throat Parking Lot, such a marker has been erected. This marker commemorates not just a crucial advance in breaking the Watergate scandal, but also more generally the importance of journalists in uncovering wrongs and keeping government accountable to the people.  Since these historic events occurred in Rosslyn, Rosslyn's prominence as a location for leading newspaper, television, and new media organizations isn't surprising.  The Ode Street Tribune proudly carries on the tradition of a fiercely independent news organization fighting for truth, justice, and the Arlington Way.
Posted by Douglas Galbi at 12:30 AM