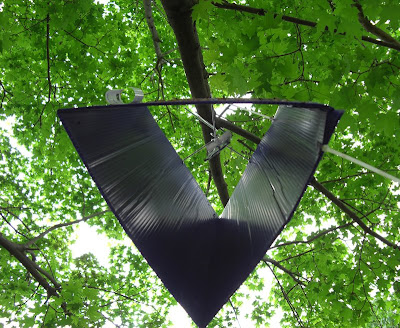 Nobody likes being bored. Especially ash trees, because the Emerald Ash Borer literally kills them. Emerald Ash Borers were discovered in Virginia in the spring of 2008. Let's keep Rosslyn exciting and free of borers.

Fortunately, we've got an Emerald Ash Borer Detection Box on an ash tree in Ft. Myers Heights Park, just below Westmoreland Condos. As far as I can tell, the box is totally soaked, along with everything else around here. I didn't notice any borers, but maybe they're hiding. I hope the box detects 'em if they're around.

Correction: The box is hanging on a maple tree. Steve Campbell attended a talk on the Emerald Ash Borer and found out that ash trees are the preferred trees from which to hang a detection box. Ft. Myer Heights Park probably got one on a maple tree because the park is a good location for detection in general. Steve also explained, "the box is very sticky, the emerald ash borer is somewhat attracted to that purple color, and there is no pheronome in the glue but there is melaleuca (tea tree oil) which they are also are attracted to."
Posted by Douglas Galbi at 9:28 PM