A half-million dollars was spent renovating Hillside Park.  The result isn't worth a tenth of that.  The North Meade Street Park renovation, which surely was much less expensive, created a space of great natural beauty.  The Hillside Park renovation added a lot of metal to the park.  Ponder what went wrong.  Figure out how to avoid fiascoes like this in the future. 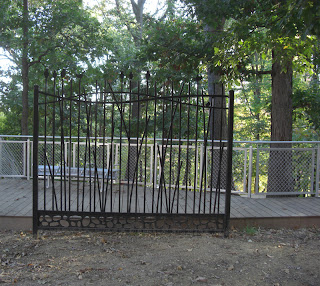 The Hillside Park renovation added a long stretch of bare-colored metal fencing to the park. The need for this fencing seems to have been artificially created with the slightly raised platform.  It separates persons on the platform from the natural beauty of the park. Terrible, terrible design.

Randomly placed black fence pieces with metallic bird silhouettes (no kidding!) accentuate the metallic feel of the space.  Rosslyn has become a center of art and fashion and creativity.  These below-cutesy, pointless fence pieces are an embarrassment to Rosslyn's avant-garde artistic sensibility.

Sure the fence has an iron-like appearance. Irony and absurdity were fashionable in last decade's contemporary art.  But I've looked and looked at the Hillside Park renovations, and I just don't see that level of sophistication there. 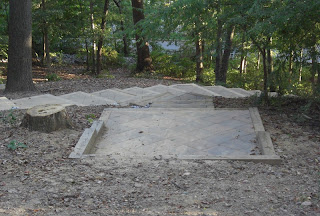 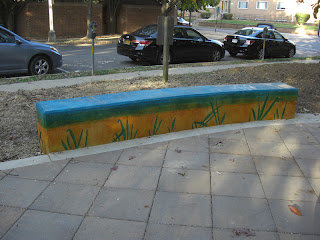 The concrete structure painted sky-blue on the top and decorated with large, painted blades of grass appears to be a bench. It falls a few thousand miles short of capturing the beauty of nature.  Anyone who renovates a park by adding painted green plants on concrete should be buried in dead leaves. 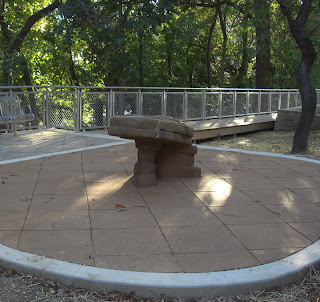 Children may soil their diapers when they see their new play area in Hillside Park.  It's a small, uneven cork surface with a weirdly shaped concrete piece in the middle.  That concrete piece has been painted brown.  It's unlikely to inspire children's imaginations.  But it may move their bowels in sympathy.

The Ode Street Tribune hereby pledges to serve our neighborhood better in the future. As a reminder of this solemn pledge, we have added an image of the brown concrete Hillside Park children's production to the right, stationary column of this news outlet.

Note: Click on the images above to see larger versions.

Update: A well-connected correspondent reported that the helicopter landing pad is is a picnic spot awaiting a picnic table.  Evidently, in the course of this six-month-long construction project, the construction of this picnic spot was not well planned.
Posted by Douglas Galbi at 7:16 PM

I think the park looks swell. Nice job Arlington. Ode Street, if you are correct that you failed in the attempt to mold this park into something beautiful, then I am sorry, no second chances. At a cost of $1.6 million, we cannot afford to let you continue.

Many thanks for share your blog site here. renovation contractor

Nice blog and if you want this type construction so you should know about the best construction company in Canada so check this link.

Impressive and powerful suggestion by the author of this blog are really helpful to me. ottawa handyman