The Mongolian School of the National Capital Area, which is located right here in Rosslyn in the Wilson School, produced a fantastic program of Mongolian culture and international culture at its "Mongolian Blue Sky" fundraiser this past Friday night.  Mongolian School students sung and danced traditional Mongolian works as well as well-known songs "You Are My Sunshine" and "We Are The World."  Some students were highly polished performers, and some were still learning.  That's the purpose of a school.

Some of the performers were apparently professional adults.  O. Luvsandagva, magnificently costumed in Mongolian attire, performed a medley on a horse-head fiddle. He then returned to do some throat-singing.  He seemed almost as good as the throat-singer in my favorite rock band, Yat-kha.   Designer M. Tuya put on an impressive fashion show.  Students at the Art Institute in Rosslyn, who know a lot about fashion, nonetheless probably could learn much from her work.   D. Odbayasakh performed contortionism that probably only a few humans beings on earth ever could do.  J. Bolormaa sang an opera number.  Unfortunately, a bad sound system greatly marred his performance.  Getting sound (and lighting) right is actually quite difficult.  I hope that next year the sound system will be better.

The Mongolian School opened in Rosslyn in October, 2005.  It now has more than 80 students enrolled. It is the largest Mongolian school in the U.S.  We are fortunate to have Mongolians as our neighbors. 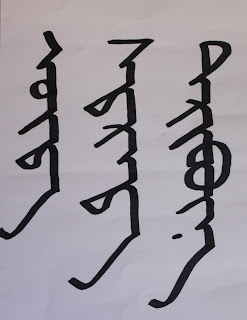 Mongolian traditional calligraphy thanks to Erdenesuren Erdenebat.
Posted by Douglas Galbi at 10:44 PM

What is the translation of the Mongolian calligraphy?

If you want to know the translation of the calligraphy, you have to ask a Mongolian.

This is a transliteration of "ode street tribune"