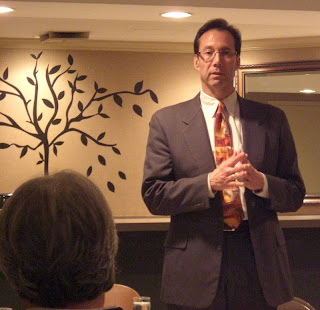 Fisette also discussed the importance of the ongoing work of Arlington's Community Energy and Sustainability Task Force.  Arlington's Smart Growth strategy depended on long-range planning that looked decades out at the effect of the extension of Metro train service through Arlington.  The Community Energy Plan will take a similar long-range view to reduce Arlington's greenhouse gas emissions and to increase energy efficiency and energy-source diversity.  Fisette explained that a high share of energy is wasted in being distributed over long distances to Arlington.  Local energy recovery offers great possibility for increases in efficiency.  Copenhagen, Denmark, offers an example of possibilities for Arlington.  Copenhagen's CO2 emissions per capita per year are 2.6 metric tons, compared to 19.7 metric tons per capita per year for Washington, DC.  Fisette encouraged residents to look at the work of the Community Energy and Sustainability Task Force, especially Peter Garforth's Task-Force-kickoff presentation.  He also noted that another Community Energy and Sustainability Town Hall meeting is scheduled for this October.

Other item and notes from this month's RAFOM meeting:

Email ThisBlogThis!Share to TwitterShare to FacebookShare to Pinterest
Labels: RAFOM