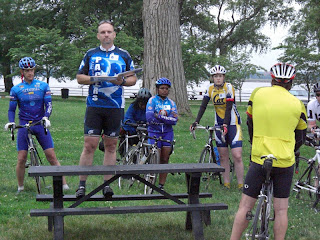 About 150 cyclists gathered at Hains Point this evening to participate in the Ride of Silence, a ride to remember cyclist killed or injured while cycling on public roads.  The Blue Suit Paces, a local bike club, organized the event.  The cyclists slowly rode in silence from Hains Point up Independence Avenue nearly to the Capitol, then turned around and returned.  Riding at that slow pace on a windy, 65 degree evening, many of the cyclists got quite cold.  But not as cold as they would be if they were dead.

A few weeks ago a rider on local bike team Squadra Coppi was seriously injured when a car door opened in front of him.  Please look before opening your door when you're parked on the street.  Also, if you see a cyclist riding several feet away from the line of cars parked on the side of the road, don't get annoyed that the cyclist isn't right up against the line of cars.  Riding within a door's distance of parked cars is dangerous.

A rising star on local bike team Whole Wheel Velo Club, out riding with his former Lanterne Rouge teammates two weeks ago, nearly got hit by a car.  Without signaling or looking for cyclists, the car pulled abruptly right to enter an empty parking space.  The cyclist, coming up on the car's right, had to skid to avoid crashing into it.   Please, use your turn signals, and check for cyclists on your right before pulling right or turning right. 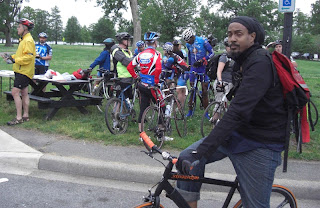