The Prison Reform Forum at the Walter Reed Community Center this evening drew a remarkable crowd of concerned residents.  In the question-and-answer period, a very elderly woman urged compassion and mercy for sex offenders.  A woman who had spent weekends incarcerated in the Arlington County Detention facility for shoplifting spoke about her struggles with alcoholism.  She stated that inmate services have helped her overcome her addition. A highly articulate man explained that he was a Vietnam veteran who suffered from post-tramatic stress syndrome.  Returning from Vietnam as a twenty-year-old with no criminal record, he got into bank robbing and spent over thirty years in the Virginia Department of Corrections.  But with the help of corrections vocational programs and his Baptist faith, he turned his life around.  He now works as a community organizer and is seeking paralegal certification.

The panelists, who came from different organizations and different political affiliations, affirmed the importance of prison reform and spoke about various initiatives.  Scott Richeson of the Virginia Department of Corrections spoke about a new emphasis in the Department of Corrections on prisoner re-entry.  She said that re-entry was being established as a part of prisoners' programs from the day of entry into the system with a new "Thinking for Change" program.  Bill Richardson from Governor McDonnell’s office noted that the Virginia Department of Corrections is the largest state agency.  With acute pressure on the state budget, reforming incarceration to make it less extensive and more appropriately targeted is on the agenda. Helen Trainer of the Legal Aid Justice Center is working on a lawsuit against Virginia's highly restrictive parole policy.  She also spoke about problems with the quality of health care and the treatment of mentally ill prisoners in the Virginia system.  Doug Ierley, a staffer for Senator Jim Webb, spoke about the National Criminal Justice Commission Act that Senator Webb introduced in the Senate in March, 2009.  The Act, which would establish a commission to review comprehensively the criminal justice system, may get passed by August of this year. 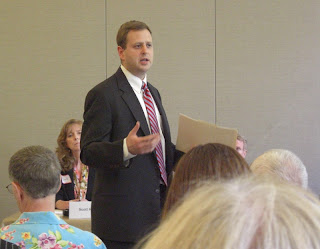 Virginia House of Delegates members Charniele Herring, Patrick Hope, and Adam Ebbin sponsored the Prison Reform Forum.  Delegate Herring was not able to attend because she had to present an award to one of her constituents.   Delegates Hope and Ebbin expressed interest in continuing dialogue on criminal justice reform.  The delegate for Rosslyn, Delegate Bob Brink, did not include any questions on prison reform in his survey of priorties.  That survey focuses on fiscal issues, yet the cost of incarceration is a quite major fiscal issue.  If Del. Brink attends the RAFOM annual meeting next year, as he did this year, attendees might ask him about criminal justice reform.

Among 2010 Virginia Assembly legislative highlights are these:
These both seem to me to be redundant, media-driven criminal laws.  Sensational reports on sexting and sexual predators are standard fare in traditional media.  Sadly, even innovative news organizations such as Arlnow have resorted to sensational posts on crime statistics and the grave public danger of flashers.  However, perhaps following the lead of the Ode Street Tribune, Arlnow seems to be shifting towards higher-quality news coverage.