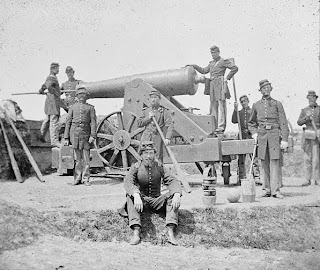 In the trying times of 1861, President Abraham Lincoln ordered the Union Army to use Rosslyn to defend Washington.  Recognizing the future importance of Ode Street, army generals wisely chose to build a large fort, called Fort Corcoran, at the current location of Ode Street (the piece in north Rosslyn).

In addition, a smaller fort, called Fort Haggerty, was built beside the historic Georgetown-(Rosslyn-)Alexandria road.  The Georgetown-(Rosslyn-)Alexandria road connected key settlements just outside the old city of Washington. The present site of Fort Haggerty is the intersection of Kent St. and Wilson Blvd., only about a hundred yards from the soon-to-be opened Artisphere.
Posted by Douglas Galbi at 2:14 PM

Email ThisBlogThis!Share to TwitterShare to FacebookShare to Pinterest
Labels: history