Tacchino Ciclocross so good it leads to thanksgiving 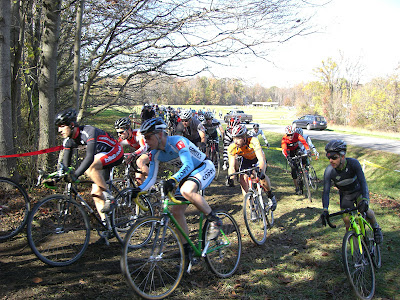 The Tacchino Ciclocross race, organized by local bike racing team Squadra Coppi, attracted hundreds of cyclocross enthusiasts to a great day of bike racing at the beautiful Rosaryville State Park in Maryland today.  Joe Dombrowski, who won last week's elite men's race at All Hallows Cross, added some extra drama this week by showing up to the starting line about two minutes after the elite field had raced off from the start.  Dombrowski peeled off his warmup jersey and raced after them.  Lap by lap he moved through this elite field until after four laps he had gained the lead.  He then rode away for a decisive victory.  Very impressive.  Too bad he didn't win a fine timepiece.

The concluding tandem race was an event to behold.  The Tacchino course featured many sharp turns, two barrier jumps, two log jumps, and several tricky off-camber sections.  Since the tandem race was last, the course was even more slick than it had been at the start of the day.  Riding a tandem on this course seems like a suicide pact.  Other than a couple in deep despair at the prospect of parenthood, why would any pair do it?   But do it they did.  Local bike racers Andrew Shelby and Nicholas Taylor of Whole Wheel Velo Club rode strongly to a second-place finish, only five seconds behind a pair consisting of two top elite men riders. 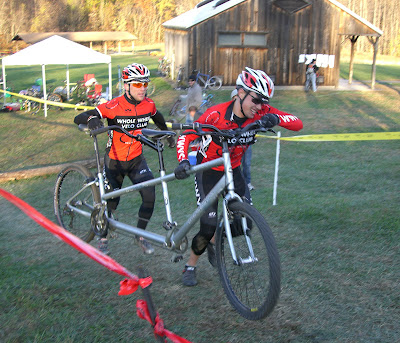 The biggest race of the day was the Men's Cat 4 race.  This event-leading race featured some great crashes among the 111 starters as well as the sort of riding that you just won't see in other races.  Squadra Coppi's own Cody Alvarez won the race.  Given its newsworthyness, the top eleven finishers (unofficial results) are listed below.

Everyone seems to have thoroughly enjoyed the Tacchino Ciclocross race.  One random Squadra Coppi team member wearing his team jacket had five persons come up to him and thank him for the race.  The person who most deserves thanks is race director Jim McNeely.  He put on a race fully worthy of a fun-loving bicycling fiend.

Through its network of investigative journalists, the Ode Street Tribune has acquired complete (unofficial) results for the following Tacchino races: Men 4; Masters 3-4 35+/45+; Men 3-4 & Single Speed; Masters 1-2-3 35+ & 45+; Women 4; Women 3; Women 1-2; and Boys 10-14.  Request the results for a rider in the comments, and the Ode Street Tribune will provide it in a following comment.

Bravo to all the bikers and winners!
Especially, big cheers for the #11 spot, none other than Doug Galbi.

I had an awful time.
one of my hardest efforts and one of my most poor finishes.

yet still glad I was there