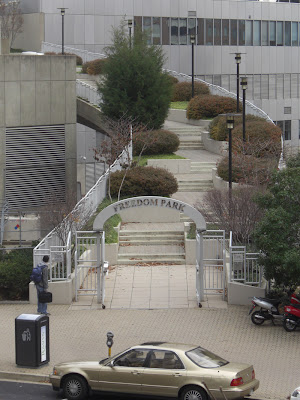 One feature that makes Rosslyn unique among major urban regions across the world is Rosslyn's green sky-road park.  Arlington County's 1964 General Land-Use Plan (GLUP) revision added a ring road around downtown Rosslyn.  However, the construction produced a western half that was slightly out of alignment with the eastern elevated half.  Hence the ring road was never connected, and a large portion of the eastern section became Rosslyn's aptly named Freedom Park.   As an informative Greater Greater Washington post on Arlington planning changes, 1960s to the 1970s, concludes, "the battle was won.  Arlington would not be a place of highways and interchanges."
Posted by Douglas Galbi at 9:55 PM