Count Gore De Vol: from WDCA-TV 20 to the Internet

At Artisphere's screening of the documentary Every Other Day is Halloween, the subject himself, legendary Washington TV personality Dick Dyszel, made a guest appearance.   From 1972 to 1987, Dick Dyszel acted the characters Bozo the Clown, Captain 20, and Count Gore De Vol on WDCA-TV Channel 20.  Dyszel's television characters are still cherished memories for many persons who grew up in the Washington, DC, area.

Dyszel noted that Bozo the Clown character was standardized nationally.  Dyszel attended clown training school in Dallas with other Bozos.  The name of person who played Bozo in a particular city was kept secret.  The production idea: "There is only one Bozo."  That, of course, is ridiculous.  There were many Bozos.  And as most persons will agree, there are still many Bozos.

Captain 20 evolved as a character but retained constant duties of hosting on-air contests.  Beginning in 1969, Captain 20 was a astronaut figure who conducted on-air gerbil races.  With Dick Dyszel as the character, Captain 20 acquired pointy ears, purple hair, and greeted viewers with the Vulcan split-finger sign from Star Trek.  He conducted on-air monkey races.  In 1974, Captain 20 began hosting on-air races among Disney characters.  Perhaps distant memories of Captain 20's Disney-character races helped to prompt the creation of the Washington Nationals' fourth-inning Presidents Races.  In 1975, the Channel 20 Club Card was introduced.  Now Safeway, CVS, Giant, Best Buy, and millions of other stores have club cards.  The Channel 20 Club Card give holders the chance to win prizes from random drawings.  Expect stores to do this in the future. 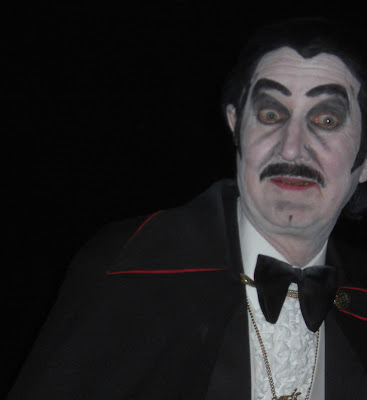 Dyszel enjoyed most being Count Gore De Vol.  He played that character on the show Creature Feature, a horror show.  It aired Saturday nights at 11pm on WDCA-TV from March 1973 to May 1987.  Dyszel noted that fans probably most enjoyed the show if they were drunk or stoned.  When Creature Feature was yanked from the air in 1987, Dyszel did not forget about the Count.  He bought Gore De Vol back in 1998 as the horror host of an Internet-based Creature Feature.  The huge Count Gore De Vol website (550 shows and increasing) adds a new Creature Feature episode every week.  The episodes are produced in a studio in the basement of Dyszel's Herndon home.  Dyszel observed that with his basement studio and camcorders, he can produce a better quality show than he did in WDCA-TV's $6 million television studio.  Moreover, with new technology, Internet video can now be viewed on living-room television sets.  Count Gore De Vol has thus returned to television.

Dick Dyszel is a long-time horror host who hasn't been afraid to face the future.  Sure, in some ways the future is a bit frightening, but there's good entertainment even in horror.
Posted by Douglas Galbi at 4:31 PM

All hail the Count! He who saved us from the horrors of boring existence, and prepared us for the wretched long haul of crum bum coprorate television. Hail!

Though Dyszel has humorously commented that some fans enjoyed the show "drunk or stoned," some of us were neither--yet it did help to have a weird sense of humor. In 1973, I was a squeaky clean, skinny little girl-fan, who wandered though an extremely uninteresting high school life. Many years later, I remain one of the Count's devoted fans and check out his internet show weekly. Bless you, Count.
LWW

What wonderful nostalgia! I grew up in Reston watching Capt 20 afterschool. This was the heyday of local programming. I really miss the local Creature Feature shows. The Counts website is the next best thing!

I got to see Gore Du Vol yesterday at Artisphere and his energy, jokes, and entertainment made the evening. The flicks were good too, he and his companions were the best. I watched him at 12 years old, he made Sunday afternoons fun! The Count's the ghoulyest! Thank you!