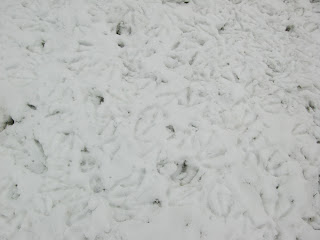 This morning on the downhill slope between the Iwo Jima Memorial and the Netherlands Carillon, many, huge bird tracks marked the snow around several trees. Some of the bird prints measured up to five inches long and four inches wide.  Many bird droppings also littered the area. 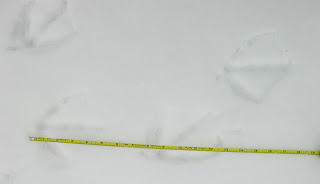 Take a walk and see these unusual marks for yourself.  But don't delay, because the snow is likely to melt soon.

Some have criticized the Ode Street Tribune for not doing enough to instill fear, distress, and worry in its readers.  We believe that you should watch birds keenly.  Look out for unusual signs and odd behavior.  Occasionally birds in the neighborhood bang into windows.  If such attacks increase in frequency and violence, be very concerned.
Posted by Douglas Galbi at 12:24 PM

Email ThisBlogThis!Share to TwitterShare to FacebookShare to Pinterest
Labels: birds

Good afternoon Mr. Galbi,
My colleague confirmed our suspicions. Those marks are from Canada geese. I enjoyed speaking with you today. Thanks for sharing your wonderful discovery!

This post made my afternoon! Scary day in the neighborhood.

Unfortunately Ranger Cassetta was not entirely accurate in his comment. He affirmatively states "Those marks are from Canada geese". I recognize his expertise but it would have been more accurate if he had said, "Those marks are the same size and shape as marks made by Canada geese". Ranger Cassetta must acknowledge that he has no first hand knowledge that those marks were made by Canadian geese. I would like to suggest that the marks may have been made by aliens from another planet who happen to have feet the same size as those of Canadian geese. I urge the Ode Street Tribune to use its considerable influence to call for and investigation by the Defense Department and the CIA.

Ranger Cassetta is a woman, not a man. As to the aliens from another planet, sorry, but we consider getting better labeling of adulterated turkey chops to be of higher priority.