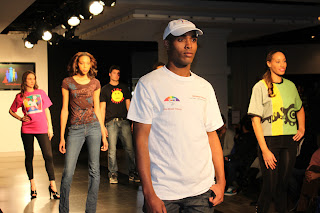 
Idziak is a notable local artistic engineer.  His local electrical-mechanical-artistic laboratory "designs and creates artifacts and environments to enhance and astound the senses."  His bike-power sculpture, A Cosmic Egg, has been a crowd-pleaser at the 2008 Planet Arlington World Music Festival and Arlington parades.  Fashion is artistic engineering and handicraft.  Let that be inspiration for you in sewing and in home repair. 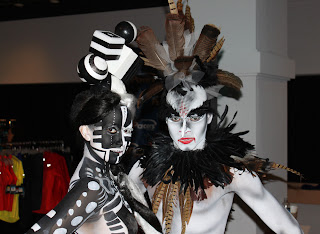 Crystal Couture's body-painted models were incredible.  Makeup artists Kim Reyes and Roger Riggle worked together to produce these masterpieces.  They will do a new work every night of Crystal Couture.  Go to Crystal Couture even just to see body-paintings like you've probably never seen before.

That the couture at Crystal Couture is fabulous isn't difficult to see.  And the models, of course, are gifted with beautiful bodies.  But there's more. Attitude and a way of moving add a lot to a look.  Models really are performing artists.  The models at Crystal Couture put on excellent performances.  They might give you an idea or two when you want to put on your own act. 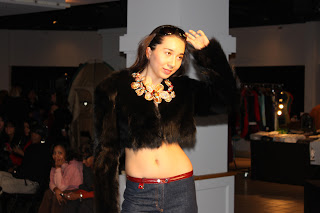 Given that Crystal City is culturally and architecturally Rosslynish, discussion of Rosslyn bringing Crystal City into a union of mutual friendship or a greater co-prosperity sphere isn't surprising.  Some eyebrows were raised, however, at the appearance of an Ode Street Tribune reporter and his date.  The Tribune reporter was wearing a Genghis Khan tie.  He reportedly said that he was honoring Rosslyn's Mongolian culture. 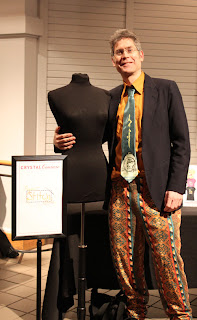 Posted by Douglas Galbi at 1:00 AM