Hilton Clarke of the UnitedHealthcare pro cycling team repeated his 2010 victory in this year's Clarendon Cup with a mid-race breakway and strong team effort from UnitedHealthcare.  Once Clarke's breakaway group had lapped the field on the short, one-kilometer Clarendon racecourse, the blue line of UnitedHealthcare cyclists impressively controlled the field from the front.  They set a hard pace and closed down some dangerous breaks to help set up Clarke's win. 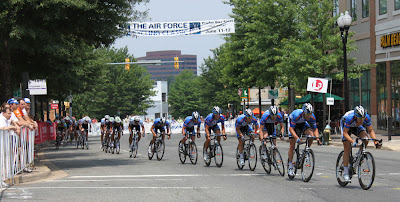 The Clarendon Cup, which is part of the Air Force Cycling Classic, takes place just about a mile from the center of downtown Rosslyn.  The course features five turns per lap and tricky winds.  Clarke, a sprinter with superb technical riding skills, loves the course.  He called the Clarendon Cup the race of 500 turns (100 laps with 5 turns per lap).  Riding the turns efficiently is key to doing well.  Clarke rode a Chris Boardman Air / 9.8 bike.  He and his teammates had stylish blue-and-white uniforms with coordinated team socks.

Wearing the yellow winner's jersey after a hard race in blistering heat, Clarke took the time to pose for photos with some local cycling fans.  That's a gracious winner.  The Ode Street Tribune will be cheering for him to take his third victory in a row at the Clarendon Cup next year. 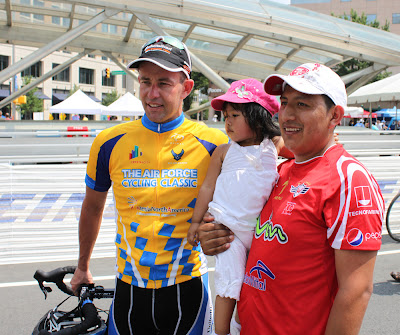 Squadra Coppi cycling star Geoff Hughes, who like Clarke grew up in Australia, had a tough day in the non-professional race.  Local cycling fans were hoping to see Hughes get another big win like his win early this season in the Chantilly Criterium.  But Hughes, who's big enough to be a linebacker on an American football team, isn't well-sized for the Clarendon Cup's tight turns.  He's better suited to the upcoming Giro di Coppi road race. 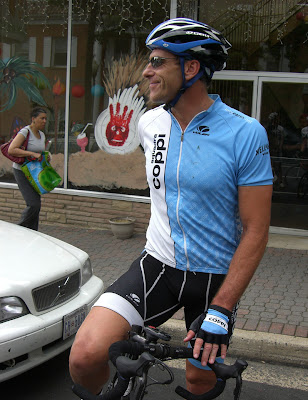 The Air Force Cycling Classic continues tomorrow with the Crystal Cup in Crystal City, which is only about two miles south of the center of Rosslyn.  Be there for more exciting cycling action.
Posted by Douglas Galbi at 5:13 PM