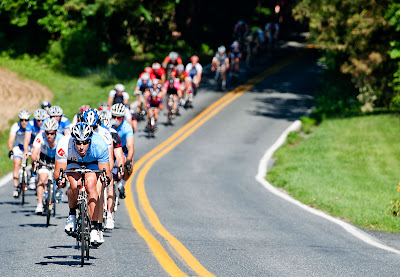 Since the beginning of July, excitement has been building among bike racing fans for the decisive day of bike racing.  That took place yesterday in the Giro di Coppi.  The Giro, sponsored by local bike racing team Squadra Coppi, continued its tradition of excellent organization and sun-drenched racing through the beautiful countryside of Montgomery County, Maryland.  No one who attend the Giro could be left with any doubts about whether bike racing is fun.

Squadra Coppi cyclist Jay Westcott remains on the injured reserve list. One small consolation is that, using his skills as a professional photographer, he took some great photos of the 2011 Giro di Coppi. Check out the photos, and be at the Giro next year.

Update: Here are some unofficial results.