Wendy M. Ross's sculpture Radiolaria (2006) rests in the Bennett Park Apartment's courtyard in historic Rosslyn.  In 1860, William Henry Ross bought land that turned into a farm called Rosslyn.  Over the next century and a half, Rosslyn has grown into a bustling center of art, business, commerce, and news reporting. 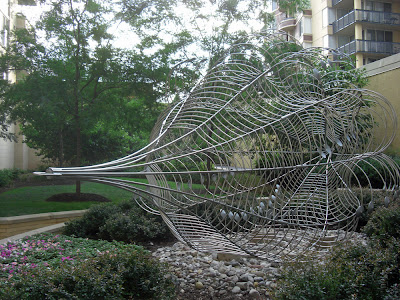 Ross's sculpture brings to mind Rosslyn's history.  That history actually goes back much farther than Ross's purchase of land.  The current construction boom in Rosslyn is a faint echo of the big bang that created the universe.  Dinosaurs preferred Rosslyn to Clarendon because Rosslyn was more convenient for wading in the Potomac.  Ross's sculpture moves across Rosslyn's deep history, connecting its prehistoric past to its vibrant present.
Posted by Douglas Galbi at 11:10 PM