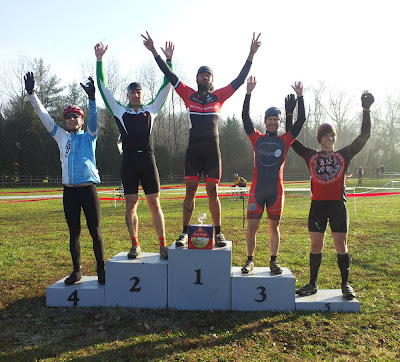 At this Sunday's Capital Cross Classic 2011, local Squadra Coppi bike racer Douglas Galbi surged from the back of the seventy-man Cat 4 field to finish on the podium in fourth. Galbi started at the back of the field because he did not pre-register for the race.  In an exclusive interview, the Ode Street Tribune asked Galbi what happened.  "I was planning on doing the regular Squadra Coppi Sunday morning team ride, but after a tough effort on the previous Sunday's training ride, I decided to go for an easier workout and do two Capital Cross races instead."  "Aren't training rides Zone 2?" the Ode Street Tribune knowledgeably inquired.  "That's what they claim," said Galbi, "but I think some of the guys get confused between Zone 2 and Zone 11."

Squadra Coppi superstar Kimani Nielsen finished 2nd in the Men's 3/4 after teammate Brad Evans took the field out on a hard early pace. With this finish, Nielsen nailed down 2nd place in the overall local super-cyclocross race series.  Squadra Coppi junior Jake Thompson, doubling up after the Junior 15-18, finished an impressive 32nd in the Men's 3/4.

The Bike Lane Race Team put on this superb cyclocross race at Lake Fairfax Park in Reston. The course featured a lot of muddy, tight turns, a steep chute drop, and a run-up that some top riders reportedly rode.  A good example of how the race served participants was the provisioning of a bike-wash station that included free Wicked Wash bike washing solution.  The Wicked Wash made the mud melt off the bike without also taking off lube.  The bike wash saved at least one participant from having a mud-caked bike sitting in his living room until spring.
Posted by Douglas Galbi at 11:38 PM

The editor didn't do anything! <== REVISE