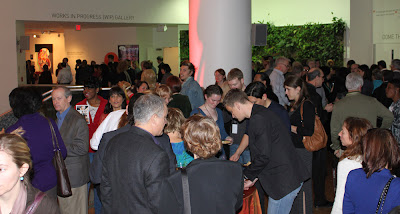 The first and only U.S. showing of Frida Kahlo's personal photographs attracted huge crowds to its Artipshere opening.  Kahlo is a world-famous Mexican artist whose life flowed in world-shaping artistic and political currents.  Mexican photographer and curator Pablo Ortiz Monasterio curated the Artisphere exhibit, which was produced in collaboration with the Frida Kahlo Museum (located in Arlington's sister city of Coyoacán, Mexico), Museo Diego Rivera Anahuacalli, the Embassy of Mexico, the Mexican Cultural Institute and Arlington County, with support from the Rosslyn Business Improvement District.  Like the Hamtdaa: Together exhibit at Artisphere last spring, the Frida Kahlo exhibit is a world-class artistic event capitalizing upon Arlington's special cultural connections. 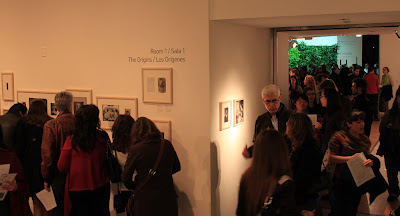 The opening ran from 7-10pm, and visitors thronged Artisphere all evening long.  If news of it had gotten out, the free appetizer of a crab dip with black beans and chips would have been enough to attract the hungry.  But this crowd seemed keenly interest in Frida Kahlo.  About 8:30pm, they were waiting patiently in line for 20 minutes to get into the exhibit. 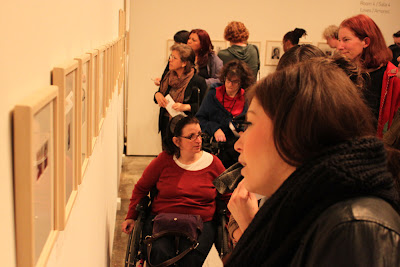 Visitors found the photographs deeply moving.  Michele, who uses a wheelchair because balance problems make it impossible for her to walk, supported herself carefully and rose from her wheelchair to peer closely at one photograph.  While outside the exhibit was the din of excited chatter, inside was much quieter as visitors were absorbed into the photographs. 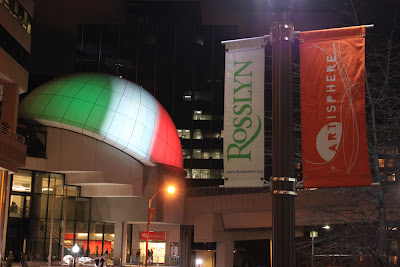 The Ode Street Tribune's beat reporter, rushing back to headquarters to file his story, was accosted on the street by a couple who wanted to know "what that was" (the dome lit in the colors of the Mexican flag).  He snarled, "If you read the Tribune, you'd know!"  Taken aback, they said apologetically, "The Tribune?"  The reporter's hard-boiled shell cracked a bit, and he said kindly, "That's Artisphere.  It's hosting the first and only U.S. showing of Frida Kahlo's photographs.  Check it out yourself!  That's what the Tribune is about."

Frida Kahlo: Her Photos is at Artisphere through March 25, 2012.   The exhibit is free and open to the public.  Artisphere has added special Tuesday opening hours to accommodate the public demand to see the exhibition.
Posted by Douglas Galbi at 10:43 PM