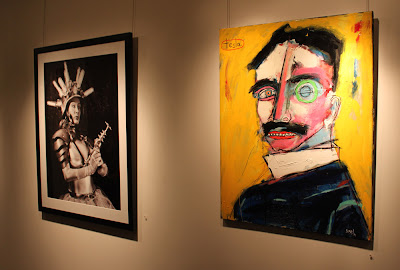 The art exhibit Elevator to the Moon: Retro-Future Visions of Space has brought twentieth-century visions of the future to Artisphere's Mezz Gallery.  Among the many excellent works in the exhibit, Matt Sesow's Tesla stands out.  Its aristocratic pose recalls the class structure of the ancient regime.  Its styling and coloring point to the future of mad science.

The exhibit opening attracted a crowd.  Despite the prominent news coverage of the Frida Kahlo exhibit, Mary M. found out about the Kahlo exhibit just in time to see it on its last day.  She then heard about the Elevator to the Moon opening, and was happy to attend. She said that she lives in Vienna and works in DC, so she can stop off the metro in Rosslyn and enjoy whatever shows are going on at Artisphere.  She bought Tesla at the opening and is looking forward to seeing it every day in her home.  If you want to see Tesla and you aren't friends with Mary, this Artisphere exhibit is your last chance.

Elevator to the Moon is showing in conjunction with the Countdown to Yuri's Night blowout blast-off party that will happen at Artisphere on Saturday night, April 14.
Posted by Douglas Galbi at 10:05 PM