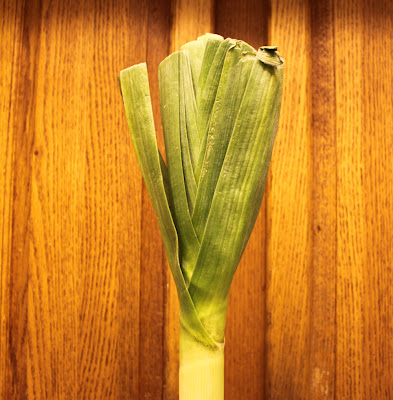 When you're in your local farmers' market or store, keep an eye out for leeks.  I spotted a leek a few days ago in Rosslyn's mysterious and intriguing underground Safeway.  I plugged the leek into my shopping bag and bought it.

I was determined to eat the leek, but I didn't quite know how.  I figured I'd just start chewing on the top.  After all, it looks somewhat like lettuce.  But then I remembered -- the Ode Street Tribune recently reported a new community network, PLACE space.  Why not ask my neighbors how to eat a leek?  That I did, and I quickly received a great suggestion from Caroline Klam.

Don't eat the top of the leek. It's tough like wood.  Cut off the top and the roots at the bottom.  Then cut the leek in half lengthwise and wash thoroughly.  Then put the leek halves, cut side down and segmented into manageable pieces, into a cast iron pot (cook everything in a cast iron pot).  Cook a little.  Then add enough boiling water to reach half-way up the height of the thickest leek.  Then let the leek pieces simmer for about twenty-five minutes.  They'll become as soft as a well-cooked turnip.

To give the leek some additional flavor, I cooked some chicken in the cast iron pot just before cooking the leek (cook everything in a cast iron pot).  I drained off the liquid from the cooked chicken and added it with the boiling water.  When you finish cooking the leek, don't throw out the liquid you cooked it in.  Simply add the liquid to quinoa that you have with the leek.  Makes for an excellent dinner that includes a side serving of cooked chicken. 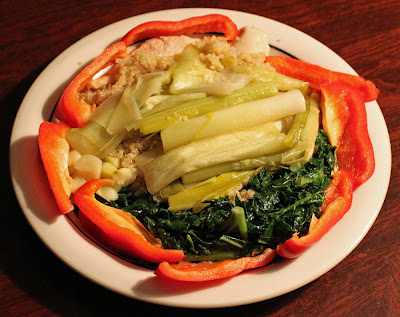 Email ThisBlogThis!Share to TwitterShare to FacebookShare to Pinterest
Labels: cvs