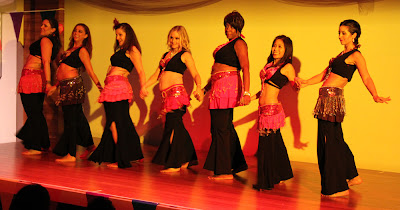 Sahara Dance, an local independent dance studio, brought a huge troupe of recreational and professional belly-dancers to Artisphere this past Saturday night for four hours of non-stop action.  This first-of-its-kind event filled the Artisphere ballroom's lower and upper levels.

This wasn't your usual immobilizing show.  The event was structured like a carnival, with dancers not just on three stages, but also moving through the crowd.  The dancers swirled, swayed, and jiggled.  Persons in the crowd could sit in chairs, but they could also move freely to socialize, play games, get food, and buy merchandise. The Ode Street Tribune's investigative reporter didn't see anyone in the crowd struggling to sit still or checking for messages on a mobile.

The Tribune's reporter interviewed a dancer who goes by the lovely stage name Alilyah.  She grew up in Missouri and took up belly dancing after seeing a Sahara Dance performance here in the greater Rosslyn metropolitan area. Alilyah has been taking classes with Sahara Dance for four years.  The classes encompass tribal, cabaret, and fusion belly-dancing styles.  For the Sahara Dance Carnival at Artisphere, Alilyah performed a cabaret dance complete with a feather boa.  Even before her dance began, she already had money tucked into her costume.  She was performing without a doubt for an enthusiatic crowd.

Imagine yourself as a belly-dancer.  If that imagination moves you, make it real! 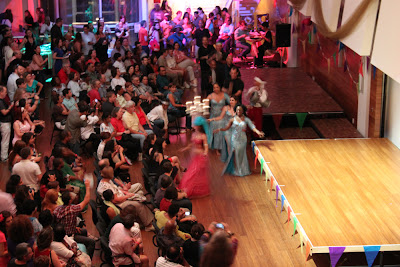