mud not a factor at Tacchino cyclocross race 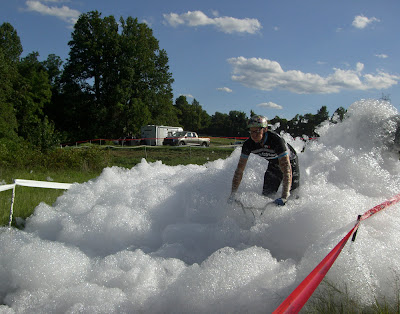 This past Sunday's Tacchino cyclocross race followed a ferocious storm on Saturday night. The bike racers eagerly anticipated a dirty day of cyclocross racing.  While the racers found some mud play early in the day, by the afternoon the course was largely dry, hard, and fast.  Most of the riders finished remarkably clean.

Rosslyn rider Jay Wescott, riding for local bike club Squadra Coppi, made his cyclocross debut in the tough single-speed open category.  The rolling terrain with many twists and turns required the cyclists to break and accelerate constantly.  That's particularly leg-breaking on a single-speed bike.  Wescott's impressive ride put him on one slippery turn right at the feet of U.S. National Cyclocross Champion Jeremy Powers, who was watching the single-speed race and later rode away to win the men's elite race.  Rosslyn sport fans should keep an eye on Wescott and other Rosslyn riders throughout the rest of the cyclocross season.

Squadra Coppi organized the Tacchino race.  The team put in a large amount of work in setting up the course, administering the race, and cleaning up afterwards.  Members of local bike team CXHairs pitched in with much muscle and a very helpful pickup truck.  When a competing team provides a huge helping hand, you know that you're in a good scene.

Race director James McNeely has made Tacchino into a widely lauded event.  This year Tacchino attracted more than 600 racers.  McNeely is taking a well-deserved retirement and turning the directorship over to Dave Pedersen, a keen cyclocross racer well-known and well-respected on the local cyclocross circuit.  Look for more good camaraderie and clean fun at Tacchino next year.
Posted by Douglas Galbi at 9:34 PM