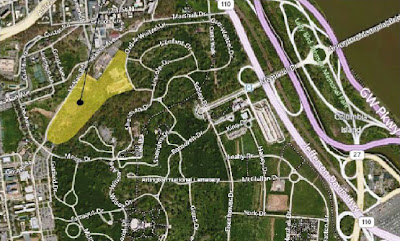 
Despite constant debts, Custis adamantly refused to use the woods for commercial purposes.  Instead, he chose to keep it as a "park' in the English tradition.  "Cherish these forest trees around your mansion, the Marquis De Lafayette cautioned Mrs. Custis in 1825.  "Recollect how much easier it is to cut a tree than to make one grow."

Many of the trees in Arlington Woodlands were cut down.  The display board reports:


Thousands of Union soldiers occupied Arlington during the war.  They cut down much of the forest to build roads and fortifications, to provide firewood and to clear fields of vision and fire for their guns.  Even in the midst of war, the soldiers made a conscious effort to save some of the largest, oldest trees around the mansion, including some of the trees here.

The proposed cemetery expansion preserves the section of the Woodlands just behind Arlington House.  The section proposed to be cut down is shown in yellow in the above map. It is best viewed from the western end of the loop road (Humprey's Avenue) or from across the boundary wall on Joint Base Myer-Henderson Hall. 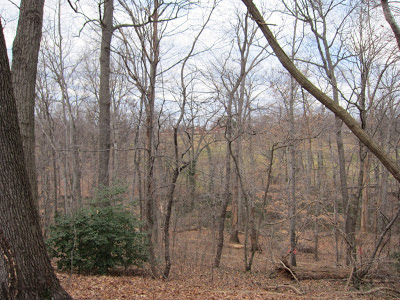 Having these trees cut down would be a great national loss.  The need for additional ground for honored military burials forces recognition of even greater losses from recent wars.  The Ode Street Tribune urges that the wood from trees cut down be saved and pieces be given to the families of the dead as a mementos of the sacrifice made to honor their sacrifices.  And walk in Rosslyn's Arlington National Cemetery and enjoy those trees while they are still there.
Posted by Douglas Galbi at 9:48 PM

Each time I used to always check blog posts within the first hours in the break of day, because I like to get information increasingly more.substance abuse treatment dc