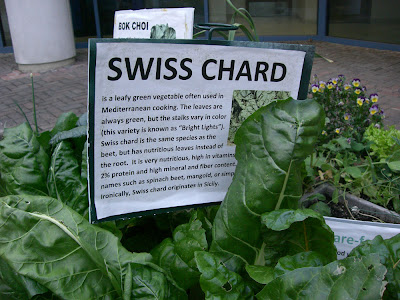 This coming Wednesday, July 24, the gardening talk at Arlington Central Library will be "how vegetables are used around the world."  The talk will emphasize using leafy vegetables for tasty wraps (such as stuffed grapeleaves, yum yum!).

Two weeks later, on August, 7, the gardening talk will be about "vegetables for the fall." The talk will discuss growing vegetables in the late summer and early fall.

Both talks will begin at 7pm in near Arlington Library's Plot Against Hunger next to the back entrance of library.

Readers have been complaining that the Ode Street Tribune hasn't produced a "celebrating vegetables" story in a long time.  Here's some news: about a month ago, the Tribune's investigative journalist found some dandilion greens for sale in Rosslyn's mysterious and intriguing underground Safeway.  The journalist bought them.  He had some raw, and some cooked, and pondered the best recipe.  Unfortunately he pondered too long.  The dandilions wilted in the Tribune's refrigerator.  The editor then canned the story.

Email ThisBlogThis!Share to TwitterShare to FacebookShare to Pinterest
Labels: csv