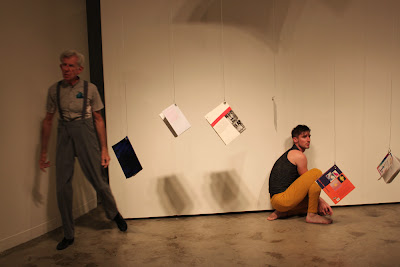 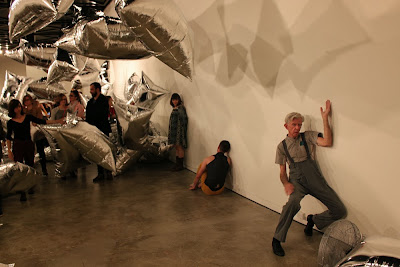 Midway through each performance, the audience was invited to follow the dancers into the clouds.  The audience then became like alternate clouds in the dancer's space.  Kate Folsom, performing for the first time with Dance Exchange, moved through the clouds with the force of a storm.  Dancer Shula Strassfeld said that each performance was unique because the dancers had to adjust their movement spontaneously to the movement of the clouds and the movement of the audience.  The participation of the audience as a cloud added personal interactions to the natural forces of winds and clouds.  The dancers' choreography spanned internal/external, personal/impersonal, intentional/natural movement.

Dancer Thomas Dwyer poignantly showed possibilities for life at age seventy-nine.  Dwyer worked as a government radio-telecom officer until he retired at age fifty-three.  Then he took up dancing.  After dancing with Dance Exchange for twenty-two years, he stopped at age seventy-five to devote more time to being the primary caregiver to his ailing wife.  She died after a long illness.  Still carrying close to the surface his grief at the loss of his wife, he recently returned to dancing with Dance Exchange.  His range of movement and expression is extraordinary.  He danced potent duets with both Shula Strassfeld and Matthew Cumbie, and never looked lost moving through the clouds by himself. 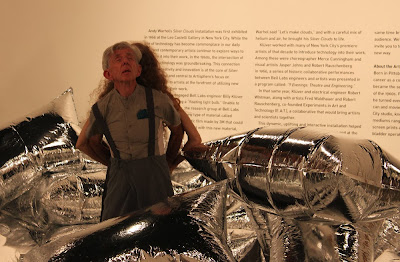 Posted by Douglas Galbi at 3:04 PM