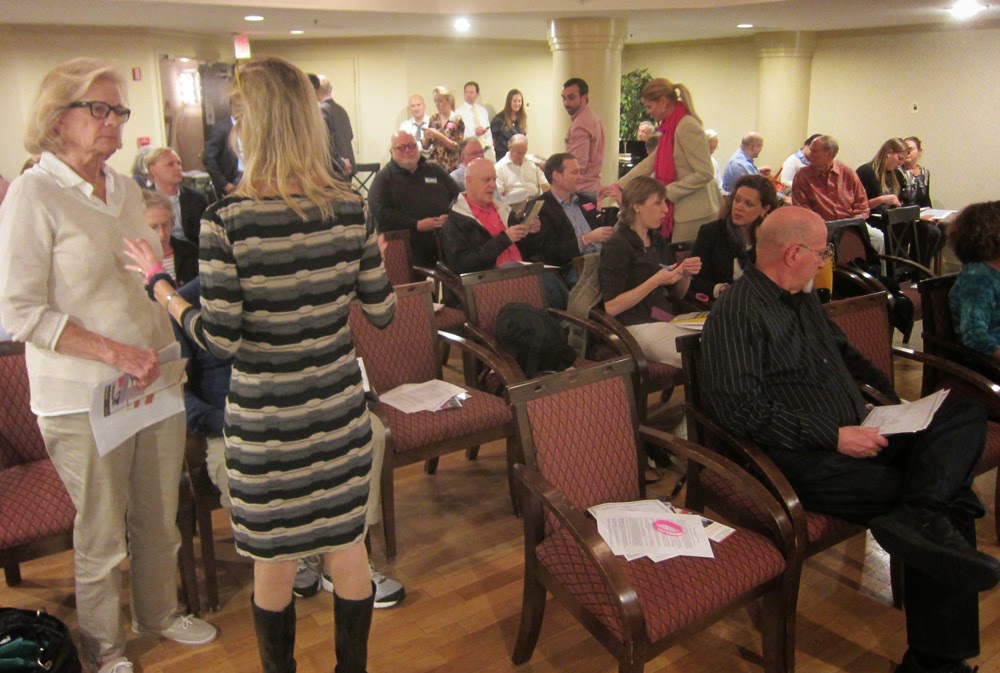 Political pundits at major Rosslyn media viewed viewed the upcoming Nov. 4 election as sure-thing landslide victories for Arlington County Board candidate Alan Howze and Congressional candidate Donald Beyer. But after tonight's dramatic Rosslyn candidate forum, the election looks to be up for grabs.

Leading candidate Alan Howze (Democrat) opened the County Board candidate panel with a knowledgeable discussion of County issues and his long-range vision for investing in Arlington's future. It was solid presentation, but with a glaring weakness. Opposing candidate John Vihstadt (Independent) evidently sensed the subtle tone of uneasiness in the packed room. He quickly mentioned some Arlington County priorities and then shrewdly started talking about Rosslyn. Immediately the room lit up with joy and attentiveness. Vihstadt devoted about 40% of his opening statement to Rosslyn-specific issues. While candidates can't be expected to write new speeches for every stop on the grueling circuit of Arlington candidate forums, Arlington County voters know that Rossyn is special. Vihstadt's appreciation for Rosslyn has probably launched him into a contending position for the Arlington County Board seat.

Among Congressional candidates, leading candidate Don Beyer (Democrat) stumbled badly. Retiring Congressman Jim Moran has served our 8th District for 12 terms. As political insiders know, Moran built his political success with regular, consistent, every-time appearances (2008, 2010, 2012) at the Rosslyn candidate forum. Beyer failed to appear tonight. Not recognizing Rosslyn's cultural, technological, and political leadership is a mistake of a rookie politician.  Whether Beyer can recover from this political disaster remains to be seen.

The four Congressional candidates who appeared at the Rosslyn forum offer voters a wide range of choices. Gwendolyn Beck (Independent), who has impressive business experience, declared her willingness to build coalitions. She also seemed to be willing to have American soldiers fight in foreign lands for abstract ideals and emotive stories. Gerard Blais (Independent Green) and Jeffrey Carson (Libertarian) pledged to end the war on drugs and decriminalize drugs. Blais favored universal health care and free college education. Carson, who has had many family members serve in the military, strongly opposed the military war on terror, which he described as a complete failure. Micah Edmond (Republican), highly articulate and politically savy, has extensive experience with the military-industrial complex. He emphasized a get-the-job-done approach. He pointed to the basic job of writing and passing a national budget.