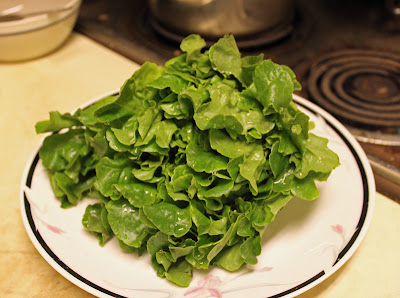 CostCo in Arlington is now selling Tanimura & Antle Artisan Lettuce.  The lettuce is grown on Tanimura & Antle farms in Salinas, California (mid-April through mid-October) and in Yuma, Arizona (mid-October through mid-April).  It arrives in Arlington in clamshell packages that each hold six small lettuce heads.  The six heads are a mix of three different lettuce varieties, each with a somewhat different taste.  The six-head package costs $3.99.

Tanimura & Antle Artisan Lettuce keeps well.  After a week in the refrigerator it's still in great shape.  Packages of loose "spring mix" leaves rot much more quickly.   Having vegetables that keep well is particularly important for single persons, who, among a wide range of hardships and injustices, often find that their vegetables rot before they consume them.

Tanimura & Antle is a company with an impressive history.  The Tanimura family left Japan in the late 1800s and settled in California.  They got into the business of growing lettuce and strawberries.  The Tanimuras persevered through the Great Depression with a business focus on iceberg lettuce. During World War II, the two young men in the Tanimura family served in the U.S. Army, while the rest of the Tanimura family spent three years in an internment camp in Arizona as part of a U.S. policy that interned all Japanese-Americans living on the West Coast.  After World War II, the Tanimuras resumed growing iceberg lettuce.  By 1950, the Tanimura's were selling all their lettuce to Bud Antle's lettuce packing business.

The Antle family left Oklahoma in search of farm work in the late 1800s.  By 1930 they were working as iceberg lettuce trimmers and packers in California.  They worked themselves into managerial positions and then started their own iceberg lettuce business in 1942.  Demand for iceberg lettuce boomed during World War II as result of supplying overseas U.S. soldiers.  By 1971, the Antle family, led by Bud Antle, has become the largest U.S. marketer of premium iceberg lettuce.

Email ThisBlogThis!Share to TwitterShare to FacebookShare to Pinterest
Labels: vegetables

Congratulations on finding and focusing on nutrition-able food. The Ode Street Tribune is performing a valuable service by encouraging its readers to practice a healthy lifestyle. I would like to add two notes to your article on lettuce. First, you should mention that the best lettuce in the world comes from Oregon. Second, the best way to get good lettuce is to construct a raised bed in in sunny location, fill the best with good top soil and plant some seeds. Nature will do the rest

We are so very happy that you discovered our Artisan Lettuce and that you were pleased with what you found! We appreciate your kind comments and the information that you shared about our company.

Tanimura & Antle Artisan Lettuce is a great product. I eat it all the time. I've also eaten some great lettuce from a smartly irrigated raised-bed garden in Oregon. But I can't get that lettuce here in Arlington.