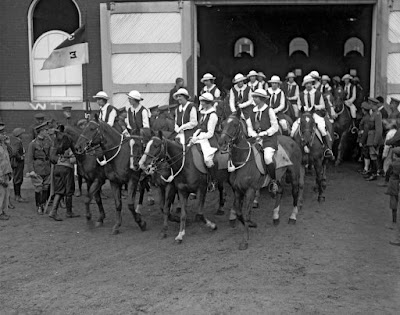 A Society Circus was held at Conmy Hall (Fort Myer's ceremonial hall) every Friday and Saturday during winter months from 1919 to 1941.  A historic walking tour of Fort Myer this past October explored Conmy Hall and discussed the Society Circus.  According to the walk brochure, "Members of the 3rd Cavalry Regiment would find themselves in various historical uniforms such as those of the Roman Legions, Genghis Kahn's Mongols [whose descendants now run a school in Rosslyn -ed.], Custer's 7th Cavalry and Teddy Roosevelt's Rough Riders."[2]


[1] The quote is from "Society Will Entertain at Fort Myer Circus," Washington Post, Mar. 31, 1922.  That article refers to a circus performance on that day (a Friday).  The photo is dated Apr. 4, 1923.   That date, however, was a Wednesday.  Circus performances occurred on Fridays and Saturdays.

[2] The Society Circus was a type of event rather than a specific group.  Here's a Society Circus photo from a performance in Long Branch, NJ in 1909.
Posted by Douglas Galbi at 11:00 PM

This image is the 3d Cavalry, but it is NOT the Old Guard. The Old Guard did not arrive at Ft. Myer until April 1948. The 3d Cav and 3d Infantry are unrelated units.

Thanks for the correction.

Fort Myer is NOT in Rosslyn. Fort Myer, a US Army Post, is part of what was the Custis Lee estate of 1,100 acres. Built during the US Civil War and first known as Fort Whipple it later included another US Civil War era lunette - Fort Cass.