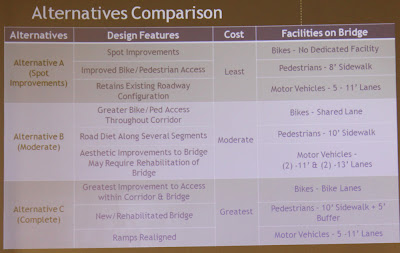 The second public meeting on the Meade Street Bridge Alternatives Study presented three alternatives for improving motor vehicle, bicycle, and pedestrian safety and for making Rosslyn and Rt. 50/Arlington Blvd. even more distinguished places.  The meeting presented a large amount of information and went on past 8:30pm.  Proposed improvements shift road intersection geometries from high-speed slip entrance/exits to more urban-style t-intersections with traffic lights.  Widening pedestrian walkways, improving road-sharing with cyclists, and narrowing the roads at the intersections are also elements of the three alternatives.

The meeting generated some heated discussion.  Issues of vigorous debate:
The Meade St. bridge study is not a construction plan, but the development of redesign concepts.  Another meeting on Meade St. bridge alternatives will occur in roughly a month and a half.  Some controversy is to be expected, particularly with public art.  Fortunately, the Meade St. bridge is so bad that making it overall much better will not be difficult.