Mardi Gras, with a touch of green 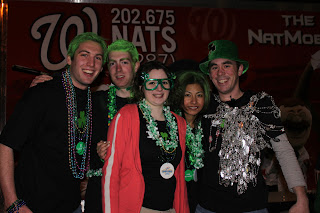 The Clarendon Mardi Gras / pre-St. Patrick's Day parade provided wholesome fun for kids of all ages.  The parade did not reach the epic proportions of Arlington's legendary Neighbor Day Parade of 2008.  But there was good spirits and some excellent floats, particularly those of Whitlow on Wilson and Liberty Tavern.  If a restaurant can put together a good Mardi Gras float, you can be sure that it can also put together a good meal.

Red Top Cabs participated in the parade with a green theme.  Red Top is adopting propane and hybrid gas/electric cabs.  That's excellent.  The next stop forward is to get a few pedal-powered vehicles. 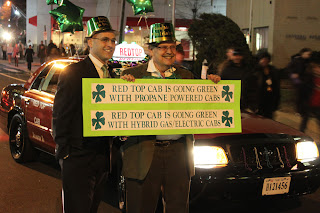 [video include above; if you don't see it, go to the post on the Ode Street Tribune]
Posted by Douglas Galbi at 11:52 PM