Everitt Clark's Night and Day, an exhibit of photographs now at Artisphere, consists of small, black-and-white photographs of scenes of decay, waste, and abandonment.  But within them is an incredibly beautiful symphony of forms playing above and below each other, dramatically crossing, twisting and funneling through the plane, and having subtle patterns and tonal shades.  Discussing one such photograph, Clark says that he would like the viewer to come away with "a sense that the sublime can be found in the humblest surroundings."  Take the time to gaze calmly at these photos, and you will find that sublime.

Clark grew up in Arlington and attended Arlington's H.B. Woodlawn School.   While enjoying video game music, he heard a Chopin waltz and became deeply interested in classical music.  After studying music intensively in college, a friend introduced him to large-format film photography.  He began to study and practice photography intensively.   Night and Day displays what Clark has achieved at this current stage of his personal and artistic development. 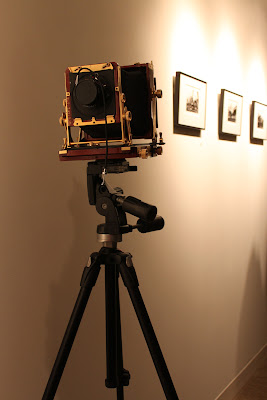 These large-format film photographs involve much different artistic work than does digital photography.  Highly artistic local news sources typically quickly take a large number of digital photographs on the scene.  Picture selection, and usually some cropping, completely makes the photo that the public sees.  Clark, in contrast, goes into the field with a large camera and tripod and just twelve exposures of film.  He spends much longer in the field composing the photograph, metering the light, and exposing the film.  Back in his darkroom, he spends 6-8 hours making a single exposure into a print.  Moreover, the print is a contact print, meaning the print is exactly the same size as the exposed film.  Most of Clark's photographs are not cropped at all, and those that are cropped are cropped only slightly.  Compared to the typical practice of digital photography, Clark's photographs are much closer to the images he composed in the field.  Clark's photographs are high fidelity in their printed quality and also in their relationship to the observed reality.

Night and Day, an exhibit of Everitt Clark's photographs, is free and open to the public at Artisphere through Mar. 31, 2012.
Posted by Douglas Galbi at 4:03 PM

Grate review, loved the stereo analogy, gave me more insight into the pictures and what I do with my digital.