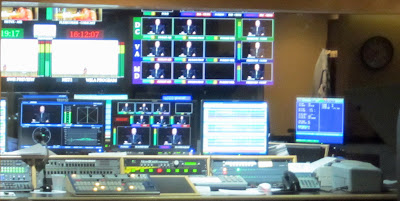 ABC7's award-winning evening news team Leon Harris and Alison Starling are featured guests at Artisphere this Tuesday evening for the opening event in Rosslyn's Rooms with a View series. Harris and Starling anchor evening news from the ABC7 television studio in downtown Rosslyn.  One part of this major news operation is on view from the lobby of 1100 Wilson Blvd.  They've got impressive hardware -- many screens, large keyboards, a lot of knobs, and huge cameras.  Moreover, according to the feature article in the new issue of Rosslyn Magazine, Leon Harris knows how to operate all of it.

Both Harris and Starling have extensive experience in the traditional news business.  Harris came to Washington after 20 years at CNN’s Atlanta Headquarters, where he co-anchored “CNN Live Today” and “Prime News,” and hosted “CNN Presents” and “American Stories.” Starling anchored “Good Morning Washington” and ABC 7 News at Noon from 2004 to 2011. Prior to working at ABC7, Starling also has the experience as a reporter at WDEF-TV in Chattanooga, Tennessee, and KIRO-TV in Seattle, Washington.

This year's Rooms with a View series is subtitled "Rosslyn as Media Central."  An event this summer will have as guest Alex Orfinger, publisher of the Washington Business Journal, and this fall, Mike Allen, Chief White House Correspondent for POLITICO. Due to a staff shortage and a large backlog of local news, the Ode Street Tribune is not able to participate in this interesting series. 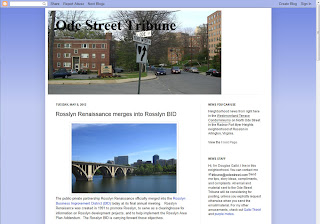 Posted by Douglas Galbi at 9:48 PM

The Ode Street Tribune, nevertheless, is one member of the press that makes Rosslyn "Media Central"!