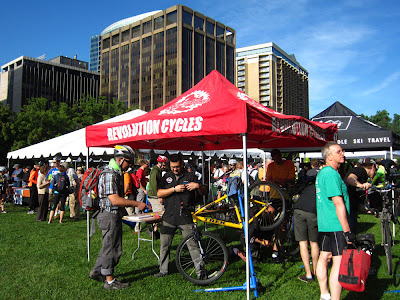 Yesterday's Bike to Work Day attracted 12,700 pre-registrants and probably many more unregistered, beautiful-weather cyclists.  The event included 58 gathering stops for cyclists to get more information on bike commuting, pickup safety gear, get bike repairs, and to socialize and enjoy some refreshments and entertainment.  The most attractive stop across the whole metropolitan area was the Rosslyn stop.  With its location at the hub of trails traversing the region, Rosslyn attracted over 1000 bike commuters to its Gateway Park stop.

BikeArlington program manager Chris Eatough was at the Rosslyn stop.  Eatough won six solo 24-hour world mountain-biking titles.   He told the Ode Street Tribune that bike riding is for everyone.  You don't have to race or ride for 24-hours straight.  Just get on a bike, get some fresh air and exercise, and ponder ways you can do that instead of burning gas in your car and fighting traffic.  Whether you're wide or skinny, old or young, whether you're black or white or yellow or feeling blue, bike riding will help save the planet and make you happier.  Start rolling!
Posted by Douglas Galbi at 2:20 PM