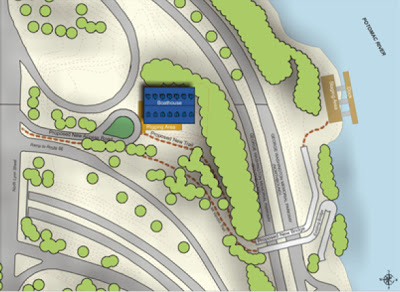 The 2002 Arlington Boathouse Feasibility Study is now available online.  Pages ES-2 and ES-3 of the Executive Summary section describe the proposals for the boathouse site in Rosslyn.  Those proposals are now subject to change, but they will give you an idea of how the boathouse and docks could be sited, along with supporting changes in roads and trails.  The Upper Key Bridge site proposal and the combination Upper/Lower site proposal appear to best integrate with Rosslyn's Gateway Park.  Keep in mind that Gateway Park is under plans for renovation.  Gateway Park will be a spectacular entrance to Rosslyn in roughly five years.  An inviting connection to a boathouse would make it even better.
Posted by Douglas Galbi at 10:01 PM