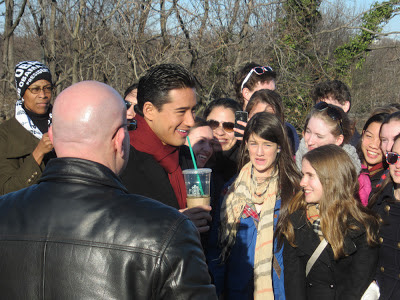 TV star Mario Lopez was in Rosslyn this past Sunday for an Inauguration Day shoot for Extra, a syndicated entertainment news program.  The shoot exploited as backdrop the scenic Washington DC view from near Rosslyn's Netherlands Carillon.  As a Hollywood on the Potomac, Rosslyn tends to attract actors, celebrities, beautiful people, and journalists. 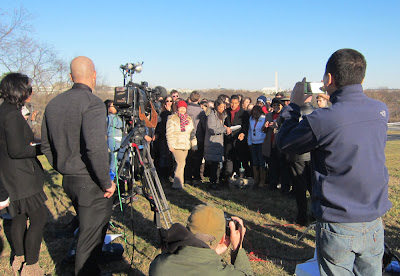 Unfortunately, Mr. Lopez did not rise to Rosslyn's high standard for acting as a journalist.  Specifically, in his shoot he mis-identified his location as "Washington, DC."  Mr. Lopez was not in Washington, DC.  He was in Rosslyn.  See video below for documentary evidence, including the unmistakable audio signal of Rosslyn's preeminence as a place to watch airplanes.


In the name of truth and journalistic standards, the Ode Street Tribune demands that Extra issue a correction about Mr. Lopez's location.  Moreover, as a gesture of goodwill toward Rosslyn, Extra should do a special program on entertainment in Rosslyn.  The uninformed would tune in because they think that's funny.  Those in the know about entertainment news would enjoy it.
Posted by Douglas Galbi at 12:34 AM