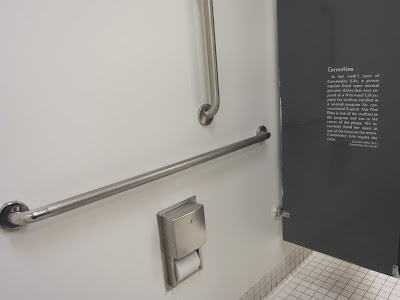 Artisphere's men's bathroom features a faux readymade installation.  On the front wall of a bathroom stall is printed, much more formally than normal bathroom graffiti:
This correction is a realistic representation of the challenges of local journalism, and it shows the integrity of a high-quality local news source.  Yet the installation also references the large body of newspaper-related art recently on display in the National Gallery's exhibit, Shock of the News.  It also circumstantially gestures toward Marcel Duchamp's Fountain, behind only Masterwork in Bluish as the most influential modern art work of the past century.