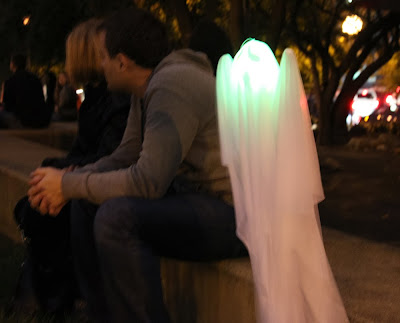 This Thursday is Halloween.  Folks on Halloween trend to dress up in various costumes and pretend to be something other than they are.  You might even see someone dressed up as a ghost.  That's not real.  Reporting such a sighting would do nothing to establish whether Mackey's ghost actually exists in Rosslyn.

Locals have long debated whether there's any truth to the legend that the ghost of famed Arlington Commonwealth Attorney Crandal Mackey is roaming Rosslyn, restlessly searching for disreputable nightlife. According to the legend, Mackey's ghost will not lie down to eternal rest until worthy nightlife is found in Rosslyn. Some persons claim to have seen Mackey's ghost on a desolate street in downtown Rosslyn on a Friday or Saturday night.  But no one had produced a credible news report.

When you need a credible news report, you know where to turn.  After staking out the Rosslyn Halloween Fest, the Ode Street Tribune is proud to present the first, incontrovertible documentation of Mackey's ghost in Rosslyn.  The ghost appeared suddenly and seemed to be searching the area for something to drink.  The ghost then hovered near several couples and seemed to be monitoring the extent of their relationships.  When last seen, the ghost was heading off in the direction of U St. in downtown DC.  However, no one in DC has ever produced any evidence that Mackey or his ghost ever had any interest in what was going in in DC.
Posted by Douglas Galbi at 10:29 PM