On June 14, 1869, Rosslyn House celebrated its recent opening as a new luxury hotel and dining place. Rosslyn House was located about where Rosslyn's Safeway is currently located. Rosslyn House was under the proprietorship of Messrs. Sykes and Chadwick, who were also proprietors of Washington's prestigious and historic Willard Hotel.  The Washington Evening Star (a newspaper forefather of the Ode Street Tribune) noted the "singular beauty" of the Rosslyn location. It described Rosslyn as offering the finest panoramic views in the region. It reported that Rosslyn House offered "cool, airy rooms" and attracted eminent guests from across the country, as well leading newspapermen and most of the notables of Washington society. 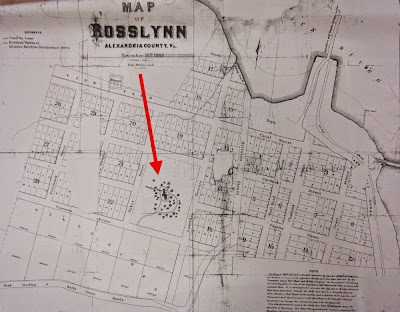 With the completion of Rosslyn's Central Place, Rosslyn will again offer the finest panoramic views in the region. Rosslyn remains a center of newspapers and other media. As for the notables of Washington society today, we Rosslyn residents know who were are.

This important and little known Rosslyn history has been recovered through the work of John Stanton at the Center for Local History in Arlington Public Library. In response to an urgent request from the Ode Street Tribune for information about Rosslyn House, Mr. Stanton found articles about Rosslyn House in the June 15, 1869, issues of the Alexandria Gazette and the Evening Star. The former brief article mentioned that proprietors Messrs. Sykes and Chadwick were "of Williard's Hotel." The latter article is reproduced in full below. The Ode Street Tribune and all true-spirited Rosslyn residents are grateful for Mr. Stanton's important discovery.

ROSSLYN HOUSE -- This suburban retreat situated on the commanding eminence at Rosslyn, Va., opposite Georgetown, was "inaugurated" yesterday by a very pleasant entertainment given by the proprietors, Messrs. Chadwick & Sykes. The first thing in order was a stroll about the grounds; and the guests, embracing gentlemen of note from various parts of the country, expressed no little surprise and delight at the singular beauty of the situation. Of the five most sightly points about Washington, Arlingon Heights, Godd Hope, Soldier's Home, Red Bank (or Pole) Hll, and Roslsyn, the latter has perhaps the finest panoramic sweep, embracing as it does the two District cities, the picturesque valley of the Potomac above Georgetown to Little Falls, and the entire circuit of heights in Maryland and Virginian shores making the rim of the Washington basin.

Nature has done wonders for Rosslyn, and art has supplemented all requisite for the enjoyment of visitors seeking a mouthful of fresh air, (followed by something more substantial), at a point not too far distance from the city. The Rosslyn House has been fitted up in the cosiest style imaginable, with cool, airy rooms looking out upon delightful views, and the whole is under the genial and experienced superintendence of Mr. Jame Hendley, late of the Kirkwood House and known all over the country as the prince of landlords. A favorite drive {in horse-drawn carriage} now is that across the Aqueduct bridge to Arlington, returning by the Long Bridge and vice versa, and the  Rosslyn House affords just the desideratum needed in the shape of a "half-way house" for refreshments and relaxation. Among the guests yesterday at Rosslyn were Hon. M.S. Wilkenson of Minnesota; Hon M. Claflin of New York; Hon R. J. Haldeman of Pennsylvania, a full representation of leading newspaper men now in Washington, and most of the notables of Washington society.
Posted by Douglas Galbi at 12:39 AM