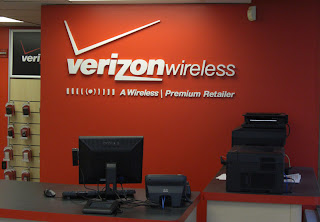 A Verizon Wireless store opened this Saturday in Rosslyn, a few doors down from Santa Fe Cafe, at the point where Wilson and Clarendon diverge.  So, while we don't have FiOS, we're only a short walk away from looking at cool wireless gadgets.  I've heard good things about the Droid.

So I walked over to the Verizon store in Rosslyn.  I asked a sales person for the store telephone number.  He said that the store is still WAITING TO HAVE ITS PHONE INSTALLED.  Yup, that's right, the Verizon Wireless store currently (as of Thurs., Apr. 8) has no phone because its still waiting for Verizon to install its (wireline) phone.

** The Ode Street Tribune brings you exclusive information with its feet on the street. **
Posted by Douglas Galbi at 7:58 PM

Email ThisBlogThis!Share to TwitterShare to FacebookShare to Pinterest
Labels: gadgets