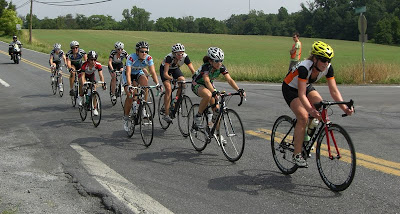 Local bike racing team Squadra Coppi held its annual Giro di Coppi today on the rural roads of Barnesville, MD.  Temperatures in the 90s and high humidity made for a hot day of racing.

Squadra Coppi's own James Donahue won the Men's Cat. 5 race with a final burst to the line.  Former Lanterne Rouge rider Nicholas Taylor emerged victorious in the Men's 3/4 race.  This superstar was once an overweight and slow cyclist.  Let that be inspiration for everyone.

The Women's 1/2/3 race came down to the final sprint among a stellar field of top area women cyclists.  With 800m to go, it wasn't clear what was going to happen.  Unfortunately, I don't know what did happen. Official results for all the races will be posted on the Squadra Coppi website once the race director recovers from exhaustion.

Scandal-rocked 2006 Tour de Frolorado winner Taxman was out on the course working as a road guard.  He was wearing running shoes.  Reportedly he has been participating in day-long mountain-bike races on a single-speed mountain bike.  Questioned about suspect activities, he refused to comment. 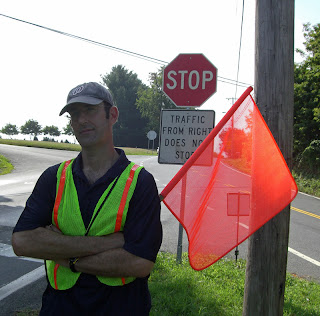 Posted by Douglas Galbi at 9:37 PM

Email ThisBlogThis!Share to TwitterShare to FacebookShare to Pinterest
Labels: bikes

What an exciting race. I am looking for a pair of men's nursing shoes and I like this type of cycling shoes. Are they suitable?