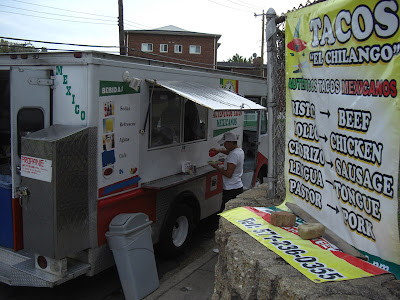 El Chilango, Autenticos Tacos Mexicanos, has a taco truck in Rosslyn near the corner of N. Quinn St. and 14th St. N. seven days a week, from 11am to 8pm.  For a mere $2, you can get a beef, chicken, pork, tongue, or sausage taco. If you want to have your order ready when you get to the taco truck, you can even call in an order.  But you have to visit the truck to get the number, because I don't want to post the number and risk them getting an expensive and distracting deluge of crank calls.

I had two tacos this afternoon. They included slices of fresh radish, cucumber, a piece of lime, and chopped cilantro.  Very tasty.  I also had a small bottle of (non-alcoholic) Sangria Senorial.   If you haven't had it, you definitely should try it.  Especially refreshing on a hot day.

A Taco Bell used to in the Court House area, just below the Wendy's.  It got demolished to make room for an apartment building that is yet to be built in the now vacant lot.  Taco Bell's tacos are far inferior to El Chilango's.  We're lucky that this great taco truck has moved into the area. 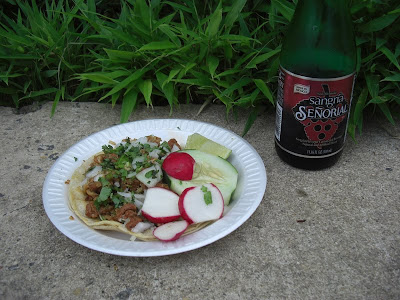 El Chilango has 4.5 stars on Yelp and a lot of good, detailed reviews. Not surprising.

Update: As TBD reports, El Chilango is operating only Friday through Sunday in August.
Posted by Douglas Galbi at 6:18 PM

Email ThisBlogThis!Share to TwitterShare to FacebookShare to Pinterest
Labels: tacos