Rosslyn is a Hollywood on the Potomac 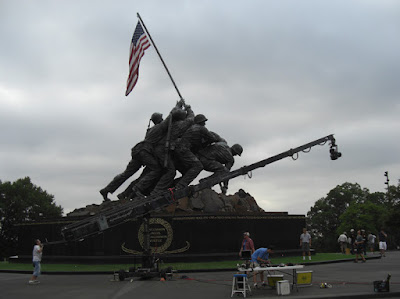 This morning a film crew was filming at the Iwo Jima Memorial.  They were making a Marine Corps promotional video.  About two years ago another Marine Corps promotional video was shot in part at the Iwo Jima.  That video achieved world-wide distribution.  With its spectacular scenery, beautiful people, and bountiful amenities,  Rosslyn is a Hollywood on the Potomac, a shooting location as well known as the other Hollywood.

The film crew shooting this morning had quite large equipment.  Our equipment here at the Ode Street Tribune is much smaller.  But as a friend explained to me, what's important is not the size of your equipment, but what you do with it.
Posted by Douglas Galbi at 11:39 PM