Speaking at the Rosslyn Renaissance's 20th annual meeting tonight, Congressman Jim Moran stated that the National Park Service has agreed to the construction of a boathouse in Rosslyn.  Rep. Moran also stated that he's looking forward to the construction of a skywalk in Rosslyn that will stretch across the Potomac.  We believe that his first statement was a factual report and that the second statement was a jest.  Those who have struggled for years to bring a boathouse to Rosslyn may judge differently. 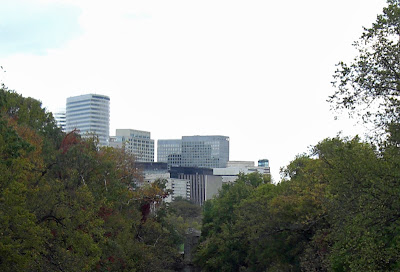 Rosslyn Renaissance's 20'th annual meeting celebrated Rosslyn's development.  Rosslyn has experienced about a fifty-fold increase in commercial building space since 1961:
The past weeks have seen major milestones in Rosslyn's development: the opening of the Artisphere; ground-breaking for the 1812 N. Moore St. building, which will be the tallest building in the Washington area; and beginning construction of a new Rosslyn metro station entrance.

Four major planning efforts are helping to guide Rosslyn's development.  One is the Rosslyn Building Heights Study.  Another is the Rosslyn Multimodal Transportation Plan. A third is the work of Rosslyn Renaissance's Urban Design Committee.  A fourth is the Rosslyn Gateway Park Master Plan. Let's hope that this planning work is better than the planning that produced the renovation of Hillside Park.

Rosslyn Renaissance will celebrate its twentieth anniversary with twenty special events.  One is likely to be a showing of a special Rosslyn video on the jumbotron at the Light Up Rosslyn ceremony.   Another will be a display in February in the Artisphere's Works-In-Progress Gallery of development work in progress in Rosslyn.  The Ode Street Tribune's network of covert sources are aggressively pursuing leads concerning the other eighteen events.  Stay tuned here for the latest breaking news on top Rosslyn stories.

Update: Congressman Moran apparently was not well briefed.  The National Park Service is still considering various options, including no boathouse.
Posted by Douglas Galbi at 10:27 PM

Email ThisBlogThis!Share to TwitterShare to FacebookShare to Pinterest
Labels: development

A question: You mention a number of studies. Are there any studies that seek to determine, "what type of development will reduce property taxes". We should know if "a fifty-fold increase in commercial building space since 1961" has been instrumental in increasing or in decreasing taxes. My opinion is that more commercial development means higher taxes. I would love to see a study that proves me wrong.

I don't know of any such studies. My crude analysis: roughly 50% of Arlington taxes go to support Arlington public schools. Commercial buildings that attract non-resident workers don't contribute to schooling expenses. In addition, public costs to provide infrastructure (electricity, water, sewage) have economies of scale, i.e. cheaper per person for large buildings than dispersed residences. So I think that more commercial development means lower taxes compared to more residential development, and probably compared to no development.

That analysis shouldn't be interpreted as an argument for commercial development. Quality of life concerns much more than just the tax level.

Your analysis reflects "the conventional thinking". However, it is interesting to note that California and New York have the highest taxes. Wyoming has to lowest.

Have to agree with Anonymous #2. The taxes in rural Shenandoah County, Va are half those of any of the urban tax districts in our area.

Great news about the boathouse. Thanks for covering this meeting. Any idea what got approved (floating/standing, square footage, location, uses, etc) and what the next steps are to make it happen?

Rep. Moran said nothing other than that NPS has agreed to the boathouse. If I get more details, I'll post them.