get Wizards' tickets for only $13 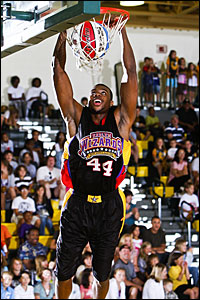 Here's your chance to see some professional basketball: the Wizards will be playing on Friday, March 25, from 7-9pm at the Thomas Jefferson Community Center near Rosslyn.  Tickets are a bargain for adults at merely $13 in advance, while students and seniors can scoop tickets for just $10.   Proceeds from the game will support the Arlington Office of Teen Programs.  Get your tickets now before they all sell out!

A Wizards player to watch is Washington-area favorite Arthur "King Arthur" Lewis.  He grew up on the tough streets of Baltimore, graduated from high school, and went on to college at nearby Bowie State University. At Bowie, he made the Dean's List three times and was an academic all-American.  He led the Bowie State Bulldogs' basketball team to a 31-4 record and to the Division 2 Final Four.  He also personally led the UCIAA Conference in Assist/Turnover ratio.  He's an inspiring example of rising above difficult circumstances.

The Wizards will play against the "Arlington Elite."  No one is quite sure who the Arlington Elite are.  The team reportedly consists of Arlington teachers, recreation staff, and community members.  The Arlington Elite inexplicably does not include the Managing Editor of Ode Street's finest news source.   With or without him,  you might expect the game to be a total blowout.


The Harlem Wizards have a unique mission: create awe-inspiring events throughout the country. Whereas a NBA team's success is measured in wins and losses, the Wizards victory lies in the millions of smiles they are responsible for and the millions of dollars raised for charitable organizations, schools, and foundations across the world.

Another important factor is officiating. The Arlington Elite should demand that an elite official from our local Cardinal Basketball Officials Association work the game.  For maximum authority and prestige, the natural choice is Cardinal Basketball's legendary Rules Interpreter, Mike Preston.  Preston's unsurpassed rules knowledge should be sufficient to get the Arlington Elite at least a few free shots.  The Ode Street Tribune urges the Arlington County Board to ask Preston to work the game.
Posted by Douglas Galbi at 10:52 PM

Email ThisBlogThis!Share to TwitterShare to FacebookShare to Pinterest
Labels: basketball