Contain, Maintain, Sustain opened today in Artisphere's Terrace Gallery.  The wide-ranging works in this exhibit has been collected around the idea of environmental sustainability.  Dan Steinhilber's sparkling Untitled (2009) gestures to the void as it fire-dances above a steel trashcan.  Its consuming flame is constructed from black plastic trashbags.  Steinhilber's wonderful sculpture is a particularly apt work to bring to Rosslyn.  As local art mavens know, Rosslyn distinguished itself in black plastic trashbag art back in 2007, when a Rosslyn resident had a piece placed in a private collection. 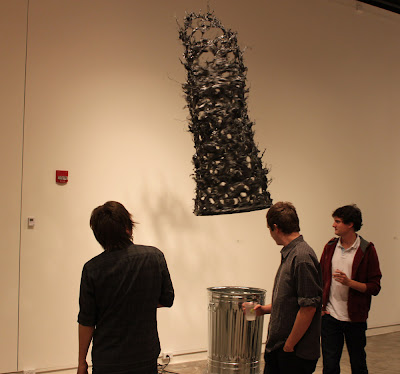 Another particularly notable work is the red space in Lina Vargas De La Hoz's Blue and Red Space (2010).  This sensuous red space, bounded by sweaters, invites exhibit participants to poke into it. It's highly stimulating. 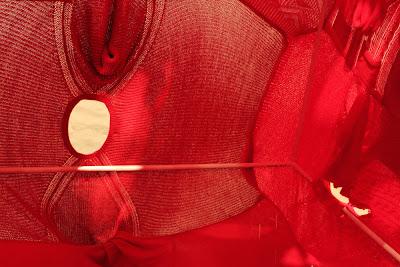 Contain, Maintain, Sustain will be at Artisphere through July 17, 2011.  Entrance is free.  Curators' talks will take place at the gallery at 3pm on Saturday, May 21 (with Sara Reisman), Saturday, June 11 (with Welmoed Laanstra), and Saturday, June 25 (with Ernesto M. Santalla).
Posted by Douglas Galbi at 10:56 PM