As part of its ongoing investigation into Paci's death and the death of a neighborhood squirrel, the Ode Street Tribune spoke with an expert from the Raptor Conservancy of Virginia.  He was holding a friendly and peaceful red-tailed hawk that had become gravely ill from an infected foot wound.  The Raptor Conservancy nursed the hawk back to good health. 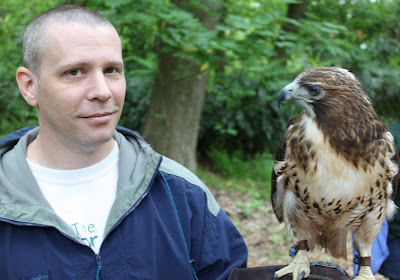 We don't believe that this hawk ate the beloved dove Paci.  This hawk just doesn't have a mean look in its eyes.  Maybe it didn't know that that the dove was a beloved pet.  In any case, red-tailed hawks don't tend to eat birds, because red-tails are too big and not agile enough to fly through a maze of tree branches.  Cooper's hawks are smaller and have a tail that gives them greater maneuverability.  Hence the hawk that ate Paci probably was a Cooper's hawk.
Posted by Douglas Galbi at 10:43 PM

Email ThisBlogThis!Share to TwitterShare to FacebookShare to Pinterest
Labels: hawks