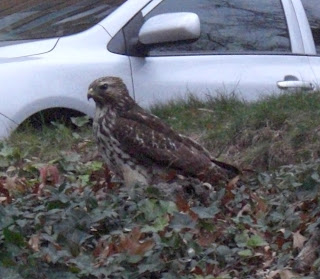 At approximately 3:53 pm EDT on Dec. 10, a hawk swooped down on a squirrel feeding peacefully in Fort Myer Heights Park.  The hawk grabbed the squirrel and flew with it to the ivy-covered embankments across the street.  When an intrepid Ode Street Tribune reporter moved closer to the scene of the assault, the hawk flew up into a tree and stared down belligerently.  By this time the squirrel was well dead.

On Saturday morning, we received a report of a hawk eating a squirrel on Constitution Avenue on Friday about noon.  Whether the perpetrator of this act was the same bird that killed the Ft. Myer Heights Park squirrel is unclear.

Our squirrel readership is hereby warned to raise its threat alert. 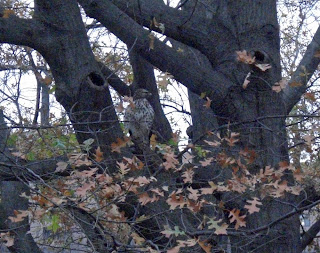 Posted by Douglas Galbi at 4:17 PM

annnd since the homeless guy in my hood always refers to my little dog as a "squirrel" we will be a lil extra vigilante as well!! :-)

I Love you read your article.
https://dartsavvy.com/best-darts/rear-weighted-darts/