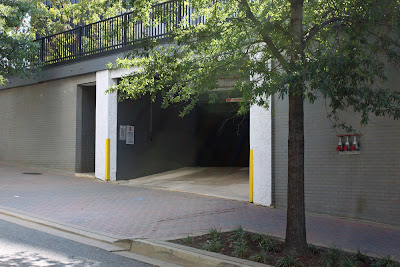 In spot 32D in the underground parking lot of 1401 Wilson Blvd in Rosslyn, just across the street from where the Internet was invented, a high-ranking FBI official ("Deep Throat") passed secrets to a news reporter.  Those secrets drove the Watergate scandal and eventually the resignation of U.S. President Richard Nixon.

Rosslyn's Deep Throat Parking Lot deserves a historical marker.  Without that parking lot, the Watergate scandal might never have been uncovered.
Posted by Douglas Galbi at 6:18 PM