Squadra Coppi's Elder in the money at Charm City

In today's exciting bike-racing action at Charm City Cross, Richard Elder, a star on local bike racing team Squadra Coppi, took 5th in the Cat. 4 men's race.  A huge field of 87 riders started the narrow, constantly turning course.  After the first lap, which featured some spectacular crashes, Elder was about 15th place.  Using his superior fitness and expert technical skills, he steadily moved up through the field, deftly navigating the sand pit and barrier jumps.  If there were another lap, he may well have finished third. 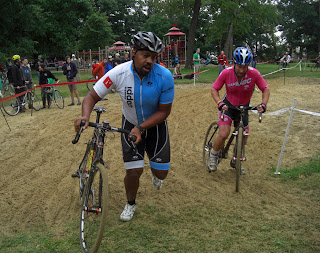 While other Squadra Coppi riders did not finish as high as Elder, they recorded some outstanding performances.  Jean Woodrow, back on the bike after having a baby, showed impressive technical skills.  Her husband Ken rode so aggressively that he crashed four times.  Adam Austin powered through the sand, leaving other riders gasping in his wake.  Kimani Nielson seemingly effortlessly floated over the barriers.  Douglas Galbi, who is regularly flogged as a beat reporter, showed his tolerance for pain by racing both a morning and afternoon race.  Micah Smith showed up 15 minutes before the start of his race, said he hadn't ridden for two weeks, and still registered a strong performance. 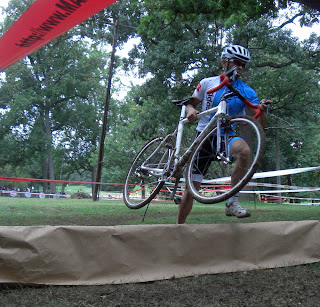 Twenty 20 Cycling of Baltimore deserves credit for putting together a fun, well-organized day of cyclocross racing.  If you missed today's racing, you can head to Druid Hill Park in Baltimore on Sunday for the second day of Charm City Cross.

Posted by Douglas Galbi at 9:52 PM