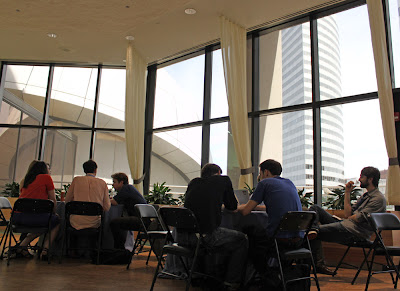 About 500 entrepreneurs gathered at Artisphere today to ponder, discuss, and develop new business ideas.  Arlington Economic Development and the DC-Maryland-Virginia entrepreneur community foster.ly organized this sold-out event.  Artisphere's creative atmosphere and Rosslyn's open-sky views provided an auspicious setting for imagining the next great thing.  In the evening, the event scheduled in Artisphere's ballroom the DC band Two Car Living Room, and in Artisphere's Dome Theater, a showing of the feature-length documentary CTRL+ALT+COMPETE.  The latter "takes a revealing look at the startup and emerging business scene through the eyes of five founders and their teams."

This afternoon at the event, the Ode Street Tribune spoke with Kenneth, the creator of the new online dating service, Spring Candy.  Kenneth said that his service is better than other online dating services because it is completely free and he pledges that it will always be completely free.  The service is ad-supported, but Kenneth said that, unlike other sites, his service keeps profiles private and does not demand that users reveal any personal information that they do not want to reveal.  The service politely and amusingly requests, "Please use your real age, it's important for accurate Chinese astrology compatibility information!"  Kenneth said that he wanted to get to know other tech developers so that he could try to recruit them when his business expands.

Chris Seline, founder of the Twitter picture search service twicsy, was at the event to uncover ideas and form new relationships.  He discussed new ideas for enabling users to socialize with photos and pointed to Doodle or Die as an example of such a service.  Instagram is an amazing example of a photo-social service that was launched in Oct. 2010, became hugely popular, and was acquired by Facebook for $1 billion last month.  The Ode Street Tribune wishes Chris such success and hopes that he will support fine online local news if he becomes a billionaire.

Recent Stanford University graduate and life-long resident of the greater Rosslyn area Artemio Rivera was at the event to meet persons with whom he might like to work.  He's lived in Brazil, Mexico, Japan and Germany, and is fluent in English, Spanish, French, German, HTML5, CSS3, JavaScript, and C.  He's highly articulate and creative.  Having persons like Artemio develop a deeper connection to Rosslyn is great for Rosslyn. 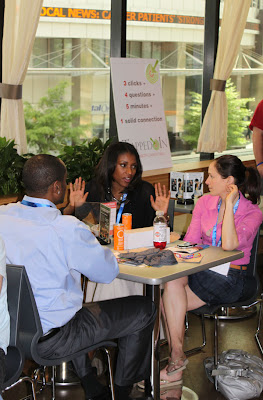 Posted by Douglas Galbi at 6:37 PM